That time has come around again for the biannual pilgrimage to the homeland to visit family and friends.  I was home in June & July of 2017, a winter visit which had only occurred because of a wedding.  I try to visit in the summer months down under (January or February) in order to catch 3 summers in a row.  The planned itinerary for this trip was as follows.  Little did I know of the events that would unfold during this trip that would make it one to remember.

Monday the 27th of January duly arrived and it was time to depart Malmö by early morning train for Copenhagen airport.  As I crossed the bridge in the fog from Sweden to Denmark, I was contemplating what was in front of me.  Relief from the depths of winter, lots of sunshine, plenty of warmth, however this was tempered quickly by the realization of the 41 hours of travel I had in front on me.  The first stretch was from Copenhagen to London to catch my flight to Hong Kong & NZ.  I would have a 5 hour layover in London before boarding the onward flight.  It seemed strange to fly 2 hours to London just to turn around and fly back over Copenhagen on my way to Hong Kong 7 hours later.  Very environmentally friendly??? 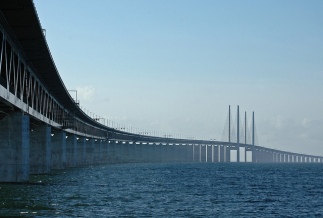 All checked in.  Next time I’d see my bags would be in Auckland.  The flight to London was almost like a short bus ride compared to the coming flights.  You were barely in the air before it was time to land again.  As we approached the UK our flight route and descent into London took us in over the Thames Estuary and along the Thames River at Tilbury.  Tilbury was where Elisabeth I mounted her land defenses ready for the arrival of the Spanish armada in 1588, which never arrived and was sunk by her navy in a storm at sea.

The reason I make reference to our flight path into London Heathrow is associated with some TV I saw the night before leaving.  Having completed my packing and putting the apartment in order, I sat down to enjoy a cup of tea before heading to bed.  I stumbled onto a documentary about the Maunsell Sea Forts guarding the mouth of the Thames River and low & behold I saw them as we flew in over the coast.

The Maunsell Forts were armed towers built in the Thames and Mersey estuaries during the Second World War to help defend the United Kingdom. They were operated by the Royal Navy to deter and report German air raids using the river Thames to find their way to London, and to prevent attempts to lay mines by aircraft in this important shipping channel.  This artificial naval installation is similar in some respects to early “fixed” offshore oil platforms.  A concrete pontoon with a bunker in it was sunk on to the sea floor and 5 to 7 metal towers were mounted on this pontoon containing accommodation, work spaces, magazines, search lights, gun and radar platforms.  They were abandoned after the war but due to there strong construction many are still standing.  The construction technology was later employed in the construction of offshore drilling platforms.  We were treated to a beautiful view of them as we flew in. 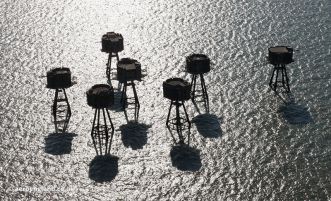 Duly on the ground it was time to change terminals from Terminal 5 to Terminal 3.  To give you an idea of the size of Heathrow it takes about 20 minutes between terminals by bus.  Once security clearance was completed, I made use of the 5 hour lay over to browse the duty free for potential purchases on the way back.  I found two new Game of Thrones Johnnie Walker whiskeys – A Song of Ice & A Song of Fire, which will be picked up on the way back to add to my collection.   I also took the opportunity to visit WH Smith’s bookshop for some English reading material (a rarity to find English literature in Sweden, mostly have to buy online).  Suitably stocked with reading material I decided to do a few laps of the terminal to stretch the legs, for once I started on my intercontinental flights there would be little opportunity to get some exercise.  From the gates at one end of the terminal to the other is almost a kilometre so a single lap is a good 2 km walk.  Exercise done, time to find the Cathay Pacific Business lounge and enjoy the free hospitality.  It had been renovated within the last year and provided a very fresh and inviting environment with great beverage & food service, a tea house, relax rooms & showers, and great view out over the southern runways.  I indulged in a late lunch of dim sums, a glass of chardonnay and settle into an armchair in front of the window and started into some of my recently purchased reading material (“Dissolution by C.J. Sansom).  After a few hours of slumming it and total engrossment in my new book I found my flight being called and made the 0.5 km trip to gate 32 for my 17.50 departure.  Priority boarding allows plenty of time to settle in, unpack and enjoy a glass of champagne while the remainder of the passengers board.  Hong Kong in 11 hours. 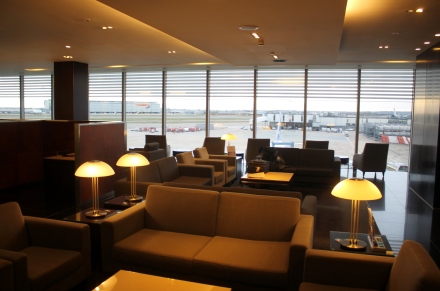 The business class cabin in both the Boeing 777 and Airbus A350 I would be flying on the route to New Zealand, are in a reverse herringbone 1-2-1 pattern (economy is a 3-3-3 pattern).  This allows each seat access to the isle and gives plenty of privacy while sleeping.  I had the luxury of a window seat which is a single seat with 2 windows.  All the seats in business class glide down into flat beds.  The addition of a mattress and a duvet makes for a comfortable bed of 190 x 65 cm.  Massive.  Plenty of space for me to curl up.  The overall service onboard is fantastic with staff using surf pads to send your orders to the galley and within a few minutes arriving to your seat.  A pre-dinner G&T followed by a resplendent dinner of 4 courses with matching wines.  The Asian airlines really know how to do service.  With the blood sugars up and feeling sleepy, time to test the bed.  It wasn’t long before I was counting sheep and six hours later I was woken for breakfast service prior to landing in Hong Kong.

Arrival into Hong Kong was a bit of a chock.  We were channeled through body scanners and had our temperatures taken before being allowed into the transit area.  This was the first contact with the reality and consequences of that virus we would all being talking about and suffering the consequences of in a few weeks.  Prior to leaving Sweden I had been discussing with my travel agent the risks of flying via Hong Kong because of the democracy riots where twice the protestors had invaded the Hong Kong airport and managed to shut it down.  The word Coronavirus had barely been mentioned prior to my departure and now I was being confronted directly by it.  As of the 28th of January it was still confined to China so hadn’t really made news anywhere.  The transit time was relatively short with just enough time to visit The Wing Business Class lounge for a shower and a chance to change into more summery clothes for my arrival into New Zealand, then it was time to board CX 199 for my 12 hour flight Airbus A350 to New Zealand.  No protesters just a virus!  Time to seat back and enjoy a glass of champagne while waiting for push back.

Twelve hour later after lots of sleep on the flight we touched down in Auckland.  I had spectacular views of our approach into the land of the long white cloud (Aotearoa) over breakfast.  Home to summer 🙂 As we taxied off the runway, we all received a little vision of what was too come worldwide in a few weeks.  The captain duly announced we would not be docking with the terminal, and that quarantine would be boarding the aircraft to examine one of the passengers.  The aircraft was parked short of the gangway and surrounded by HAZMAT vehicles who began docking with the plane.  Onboard came personnel in full HAZMAT kit.  Which cabin did they decide to enter – business class, and where was the passenger sitting?  Two seats behind me :O  There was little one could do but sit and wait.  Full medical examinations were made of the child and her family onboard.  As I was so close I could here what was being said.  It was clear the child was very sick and its sibling was showing signs too however it was determined it was abdominal and not respiratory.  With the children and family disembarked to ambulances, the plane was drawn forward to the landing gate and we were allowed to disembark after almost 2 hours.

Originally I had a 5 hour layover in Auckland but that had been shorten considerably and meant it wasn’t to hard to fill in the time.  It was just nice to be out in the sun and warmth after the northern winter.  There is a very special light in New Zealand, everything seems brighter and more vivid.  The direct flight from Auckland to Dunedin seemed like a hop skip and a jump and then we were there, compared to the previous 18,000 km I had just done.  Family were there to greet me and all that was left was the one and half hour road trip to Gore.  Let my holiday begin. 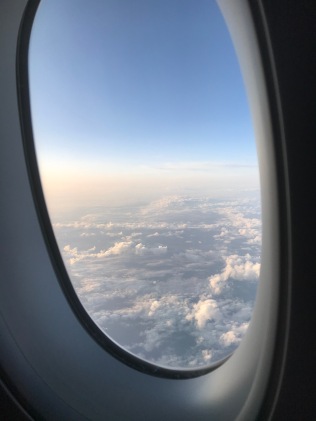 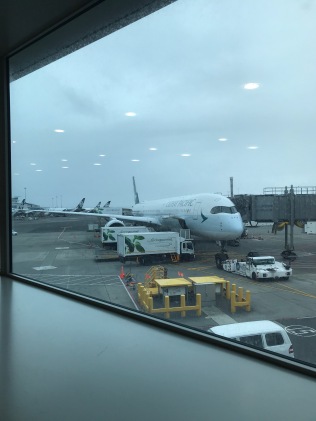 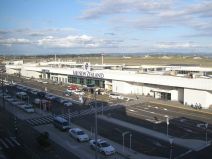 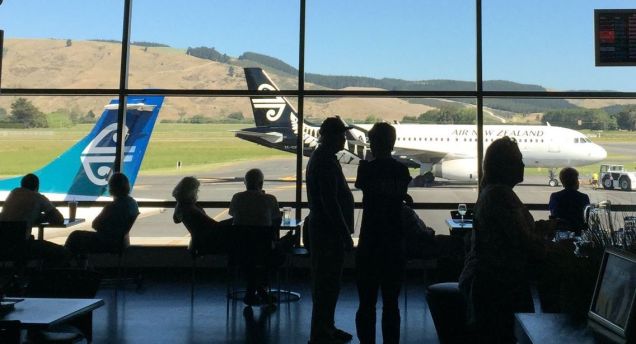