Saturday we awoke to a sunny but cold London winter morning.  The plan was to walk into the City of London and find some brunch along the way.  Breakfast got a bit way laid as we stumbled onto some of the iconic architecture of the City.  The first was the architectural icon – the Gherkin (or more correctly named 30 St Mary Axe) in the centre of the financial district.  Its unique shape and 41 floors at a height 180 metres makes an imposing impression on the London skyline. 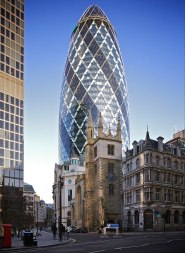 Close by to the Gherkin is the Leadenhall Markets.  The market dates from the 14th century and contains fresh food vendors such as cheesemongers, butchers and florists.  Originally a meat, game and poultry market, it stands on what was the centre of Roman London.  The ornate roof structure, painted green, maroon and cream, and cobbled floors are from 1881 by Sir Horace Jones.  It has featured in many films such as Harry Potter and the Philosopher’s Stone (2001), where it was used to represent the area of London near the Leaky Cauldron and Diagon Alley.  Leadenhall Market also formed part of the marathon course of the 2012 Olympic Games with runners passed through the market.  It is stunning piece of 19th century architecture in sharp contrast to the 21st century Gherkin. 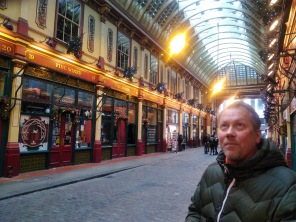 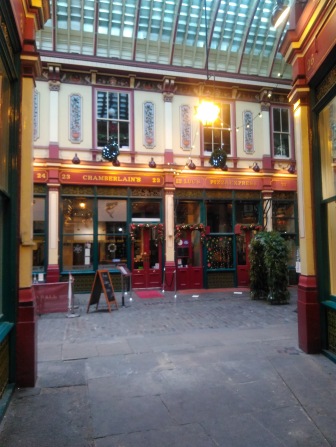 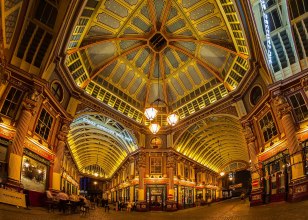 From there it was onto breakfast in the financial district followed by a wander around Bank (refers to the Bank of England) & Monument (refers to the Monument to the Great Fire of London in 1666) areas before catching a tube to Covent Gardens.  The name Covent Garden is probably most associated with opera and the Royal Opera House at Covent Gardens.  But the name actually refers to the 13th century walled kitchen garden and orchards of Westminster Abbey and as London grew the gardens disappeared and in the 17th century it became a fruit, flower & vegetable market.  By the 19th century the area had begun to fall into disrepute, as taverns, theatres, coffee-houses and brothels opened up.  Some of those theatres still remain today such as the famous Theatre Royal, Drury Lane.  The original market has been covered by roofs & buildings, and shops & restaurants have replaced the fruit & vege stalls.  The Christmas decorations in the Apple Market make quite a display – silver balls and mistletoe lights.  I stood under the mistletoe for and hour but nobody kissed me 😦 😦 😦 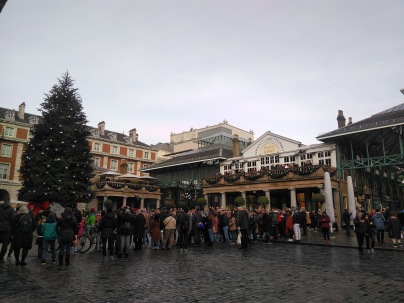 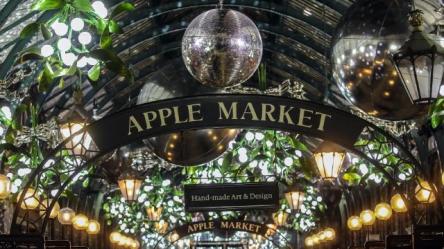 It was about this time the rain arrived.  Just as we began to make the one & half kilometre dash to Mr Fogg’s House of Botanicals in Fitzrovia for drinks & lunch.  We had actually booked a table for Friday night but had somehow mixed up our days and missed it.  Fortunately they could fit us in for lunch today.  Now Mr Fogg’s bars are a concept based on a collection of adventurous bars around London transporting you back to the Victorian era of Jules Verne’s Phileas Fogg.  There are five locations – a Tavern, a Gin Palour, a Bar in a Victorian Train (Society of Exploration) and a Dockside distillery.  The one we were visiting was suppose to represent the house where Philaes Fogg and Passepartout kept their collection of plants gathered on their trip around the world.  I must say the evirons were top notch and authentic with even the staff dressed in period costume.  The cocktails were divine however the food was just mediocre pub fair.  Good thing was the staff took the critic with a positive attitude and informed us that a review of the menus was underway.  A recommended visit if just for the environs and drinks.  I did hear a rumor that their high afternoon teas are not to be missed.  Refueled and lubed up it was back out into the rain again. 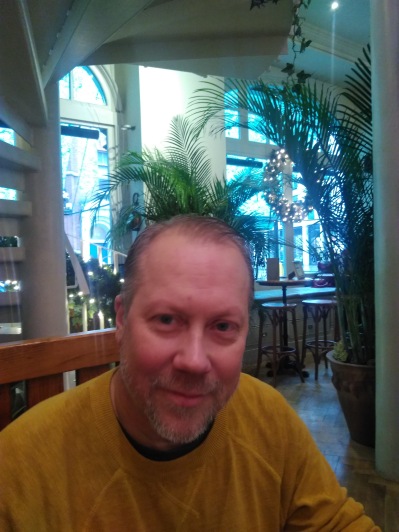 From there we hit the Christmas Shopping on Oxford Street.  It was still pelting down with rain.  Miserable!  Oxford Street was beautifully decorated but congested and unpleasant in inclement weather.  Patrik managed to snag some deals on some Christmas sweaters and a new winter jacket while my extravagance knew no bounds and extended to buying some Christmas sweets.  Big spender! 🙂 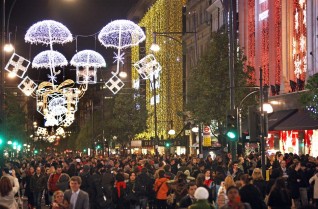 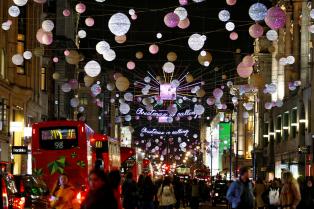 To escape the crowds we headed to Notting Hill & Portabello Road to meet with friends for a drink & dinner, however not before another wander down memory lane.  Patrik lived in this area when he lived and worked in London in the 90’s.  We couldn’t visit here without going down Portabello Road on Saturday afternoon, its biggest market day.  Portabello Road Market is divided into five sections: second-hand goods, clothing & fashion, household essentials, fruit, vegetables & other food, and antiques.  It is the world’s largest antiques market with over 1,000 dealers selling every kind of antique and collectible.  Just off Portabello Rd. on Kensington Park Rd is the Biscuiteers Boutique.  A quaint little shop & cafe selling iced ginger biscuits decorated in a variety of motifs, and at this time of year the theme was predominately Christmas.  So what does one do, but buy some 🙂 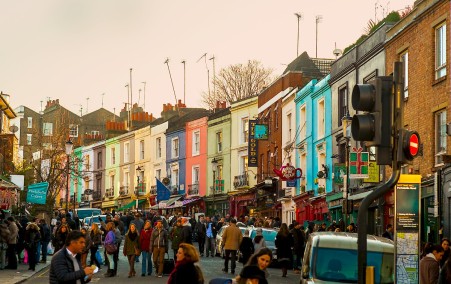 By now I was truly sick of feeling cold and wet.  The rain hadn’t let up since we arrived in Covent Garden about 6 hours ago.  We had decided to meet up with friends Mats & Erik for a drink & dinner.  After some confusion about times, inability to find one another and the genuine misery of the weather we finally stumbled in to Sun in Splendor Pub to recuperate.  What was meant to be just a stop for a drink before dinner turned into an evening of many pints, lots of chatter and some fantastic pub grub.  I warmly recommend this place.  Atmosphere is fantastic, the staff are great and the food & drink some of the best pub stuff I have had.  Hearts, stomachs, bodies & souls reconditioned from the horrible weather and an evening spent with great friends it was time to head across London to our hotel.  Upon arriving at Notting Hill tube station we were confronted with the news that the District Line was out of action meaning we were going to have difficulty reaching Whitechapel and our hotel.  But with Mats & Erik’s help and the amazing London tube system (which I think Londoners complain too much about), we found we could travel two stops in the opposite direction to catch the Circle Line to Liverpool St station, then the Central Line to Mile End (two stops passed Whitechapel) and then return on the Hammersmith & City Line to Whitechapel.  I just love the London Tube 🙂  Most other places or cities you have one travel option and if that stops then you proverbially stuffed. Nighty night. 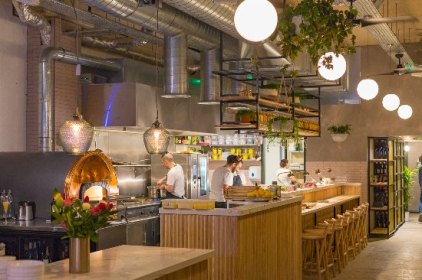 Fuel onboard we made our last visit to the inner city.  This time Leicester Square and the Christmas markets.  Leicester Square was created out of fields (outside Westminster) in 1670 by the Robert Sidney, the 2nd Earl of Leicester when he built his London residence.  The square has had some prestigious residents over the decades including Frederick, Prince of Wales and artists William Hogarth and Joshua Reynolds.  The area has always been associated with entertainment and is the centre of the cinema district in London hosting many of Britain’s film premiers at the Odeon or the Empire.  Here can you usually purchase your tickets to any West End show you wish to see.  At the North end of the square is the Swiss Clock.  It brought back memories of my first visit to London in July 1990 as I made my journey to re-settle in Sweden.  When planing to meets friends in the city, it was always under the Swiss Clock and 30 years on it is still serving that function.  I have used it as a meeting point on numerous visits and sometimes you will be surprised who you find there.  While planning to meet another friend at the clock, I run into another acquaintance who I hadn’t send in 10 years and the last I knew they were living in Australia.  That chance meeting under the clock all those years ago lead to the renewal of friendship which has been ongoing since then for the last 20 years.  After a circuit of the Christmas Markets it was time to make tracks back to the hotel, collect our bags and catch the train to Gatwick.

A trip to London would not be complete without stocking up on food items that reminded me of home or are unavailable in Sweden.  So a trip to Tescos during the visit was inevitable to stock up and get some Christmas goodies among other things.  A picture speaks a thousand words 😛 😛 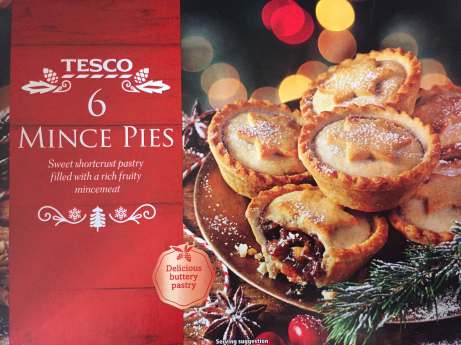 With some time to kill at the airport, a chance for one last meal together at Jamie’s before we parted ways and to stock up on some duty free.  Low and behold look what I found.  Game of Throne’s whiskey – The White Walker.  One friend would later comment on it when I returned to Sweden.  What is it? Whiskey with a taste of Tipex 😀 😀 Witty! Not!

Thanks for the trip down memory lane Patrik. ❤

Merry Christmas to one and all.