Good morning, good morning from one of the southern most points of Germany.  So close to the border that if I get out of one side of the bed I am in Germany and the other in Austria. 😀  Today is a day of sightseeing without any traveling.  Of mad kings, swans, castles, lakes and intrigue – all leading to a classic tragedy and inspiration for Disney.  Today’s destinations are Schloss Hohenschwangau and Schloss Neuschwanstein on the Alpsee lake in Hohenschwangau.  Lots of swans (schwan) and lots of shires (gau).

Millions of tourists flock here to enjoy the magic created by the vision of one supposedly mad king who met such a tragic end but left us with a legacy – King Ludwig II.  I mentioned him briefly in a previous post in my blog when we visited Chiemsee.  He built the Herrenchiemsee palace on an island in the lake which was meant to imitate Versailles but was never completed because of his death.  The area of Schwangau is synonymous with King Ludwig II and what he achieved here, often leading to him sometimes being called the Swan King or the Fairy Tale King. 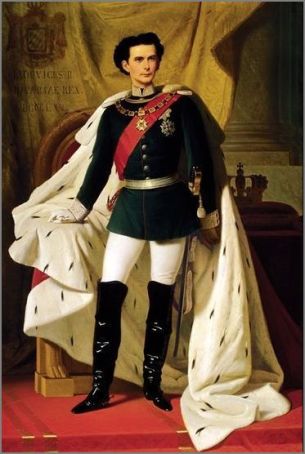 To understand this area and what he achieved we must know a little about him.  Young Ludwig had a much closer relationship to his grandfather Ludwig I than with either of his distant unloving parents.  Later in life Ludwig would refer to his mother as “my predecessor’s consort.” Ouch!  Mother you have been burned!  His father Maximilian II died unexpectedly when he was just 18 leaving Ludwig ill-prepared to handle the responsibilities of the throne.  Looking back in 1873, he described the situation as follows: “I became king much too early.  I had not learned enough.  I had made such a good beginning … with learning the state laws.  Suddenly I was snatched away from my books and set on the throne.  Well, I am still trying to learn.”  Ludwig II increasingly withdrew from day-to-day affairs of state in favour of extravagant artistic and architectural projects.  He commissioned the construction of two lavish palaces; the Linderhof Palace and Neuschwanstein Castle.

Ludwig II spent all his royal revenues on these projects, borrowed extensively, and defied all attempts by his ministers to restrain him.  This extravagance was used against him to declare him insane.  It lead to angry ministers & doctors managing to section and detain him.  On June 12th, 1886 Ludwig was deposed, escorted out of his beloved Neuschwanstein castle and taken to Schloss Berg at Lake Starnberg.  Ludwig was shattered.  One evening Ludwig and his doctor took a walk by the lake.  The next day Ludwig’s lifeless body was found floating in knee deep water along the shore of Lake Starnberg.  The autopsy found no water in Ludwig’s lungs and yet his death was still declared a drowning.  Dr. Gudden, one of the corrupt psychiatrists who had declared him insane, was also found dead next to Ludwig.  His body showed signs of a struggle and attempted strangulation.  The Empress Sissi, said of her beloved cousin “the King was not mad; he was just an eccentric living in a world of dreams.  They might have treated him more gently, and thus perhaps spared him so terrible an end.”  The mystery remains.  Today, his architectural and artistic legacy are some of Bavaria’s most important tourist attractions.  Although Ludwig funded all of his projects with his own money, it’s still a common misconception that he squandered the country’s money and drained the Bavarian treasury.  On the contrary, his personally funded building projects hugely benefited the economy by employing hundreds of local workers and artisans.  His passion for building extravagant castles still benefits Bavaria today with huge tourist revenues…so who’s the crazy one now?  One of his most quoted sayings is “I wish to remain an eternal enigma to myself and to others.”

The greatest stress of Ludwig’s early reign was pressure to produce an heir.  This issue came to the forefront in 1867.  Ludwig became engaged to Duchess Sophie Charlotte, his cousin and the youngest sister of his dear friend Elisabeth, Empress of Austria.  They shared a deep interest in the works of Wagner. The engagement was announced on 22 January 1867; a few days earlier, Ludwig had written Sophie that “The main substance of our relationship has always been … Richard Wagner’s remarkable and deeply moving destiny.”  Ludwig repeatedly postponed the wedding date, and finally cancelled the engagement in October.  Ludwig never married, nor had any known mistresses.  It is known from his diary, private letters, and other surviving personal documents, that he had strong homosexual desires.  He struggled all his life to suppress his sexual desires and remain true to his Roman Catholic faith.  While homosexuality had not been punishable in Bavaria since 1813, the Unification of Germany in 1871 under Prussian rule changed this.  Throughout his reign, Ludwig had a succession of close friendships with men, including Prince Paul (a member of Bavaria’s wealthy Thurn und Taxis family), his chief equerry and Master of the Horse, Richard Hornig, Hungarian theater actor Josef Kainz, and courtier Alfons Weber.

Ludwig II of Bavaria – the queen who was king.

It is also possible he had a deep desire for Richard Wagner as evidenced in their correspondence however it is suspected it may have been one sided and Wagner was using the king to fund his operas.  Wagner’s great opera cycles might not have existed were it not for the support of his patron.  The King’s enormous fairy-tale castles, Teutonic, neo-gothic and oriental versions of Versailles were the grand opera sets made flesh.  No expense was spared for the staging of Wagner’s operas, which were often performed with Ludwig the sole member of the audience, and in return Wagner gave him his genius and his love.  Wagner acknowledged that “Without him I am as nothing! Even in loving him he was my first teacher. O my King! You are divine!”  Ludwig refused to get married, even for state reasons, and wanted to give up the throne to live with and for Wagner.  But it was not to be, for Wagner loved women as well as music and power.

When not busy falling in love, chasing stable boys or throwing money at Wagner, he commissioned the construction of two extravagant palaces and a castle.  Neuschawnstein Castle (b. 1869-1886) is probably the most well known castle in the world as it graces many a calendar and was an inspiration for the Disney logo.  It is built on the site of two twin medieval castle ruins – Vorderhohenschwangau Castle and Hinterhohenschwangau Castle.  It was built in the Romantic revivalist style (an imitation of 12th century architecture) and was meant to be the permanent private home of the king.  It was only completed a few months before his death and in the end, Ludwig II lived in the palace for a total of only 172 days.  Upon his death in 1886 it was opened to the public and has remained so ever since having seen some 60 million tourists in that time.  The king had received inspiration from visits to several other romantic revival styled castles in Germany and France.  The romantic interpretation of the Middle Ages, as well as the musical mythology of his friend Wagner, whose operas Tannhäuser, Lohengrin & Parsifal had made a lasting impression on him, and inspired the design of a knight’s castle.  The suite of rooms within the castle contain the Throne Room, Ludwig’s suite, the Singers’ Hall, and the Grotto.  The interior and especially the throne room are in the Byzantine-Arab style.  Throughout, the design pays homage to the German legends of Lohengrin and the Swan Knight.  Due to its secluded location, the palace survived the destruction of two World Wars.  During WW II it served as a depot for Nazi plunder that was taken from France.  In April 1945, the SS considered blowing up the palace to prevent the building itself and the artwork it contained from falling to the enemy.  The plan was not carried out and at the end of the war the castle was surrendered undamaged to the Allied forces. 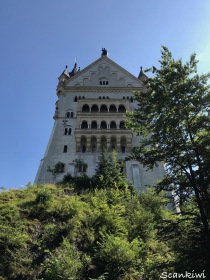 In the forest above the Neuschwanstein Castle is the Queen Mary bridge (Marienbrücke).  It is named after Queen Marie of Prussia, the mother of Ludwig II and wife to King Maximilian II.  King Maximilian II constructed a wooden bridge in 1845 over the “Pöllatschlucht” (Pöllat Gorge) as a footbridge for riders.  It was later rebuilt by Ludwig II in iron as it is seen today.  It stretches 35 metres over the gorge at a height of 90 metres.  Interesting sensation to be out on the bridge with uncontrolled access of hundreds of tourists all vying to get out there at the same time.  Especially irritating are the ones with “selfie sticks.”  Once out there you receive a fantastic view of the castle, the gorge and the Lake Forggensee in the background. 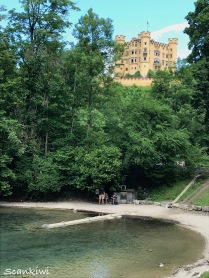 We did not visit the Hohenschwangau Castle instead deciding maybe on lunch near the Alpsee lake.  In the end we ended up returning to Füssen instead for lunch and a look around there.  It was may be a bit of a mistake as we were to find out.  Most things tend to be shut on Sundays in Bavaria including the supermarkets which for a tourist is rather inconvenient, how ever we managed to survive (see the next post on Füssen). 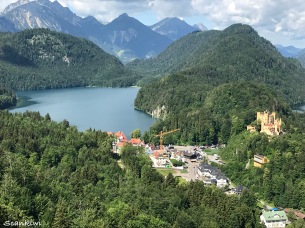 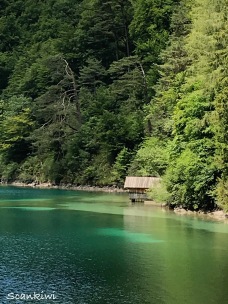