Today we leave the lovely environs of Salzburg and head to the beer drinking capital of the world, Munich.  I promised myself I will be back to Salzburg.  I have to fulfill my dream of attending a Mozart concert or opera here.  Steph decided on one of the day’s activities, she wanted to head underground ??????? Hi ho, hi ho, off to the Hallein Salt mines we go. 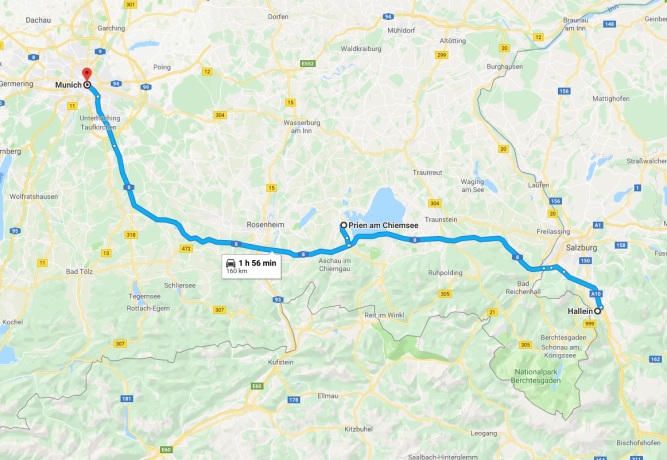 As mentioned earlier, salt has played a big part in the history of this area of Austria & Salzburg, and the only place to find it is underground.  The Hallein Salt mine goes deep into the Dürrnberg mountain.  Miners have hauled out the “white gold” from here for over 2500 years.  The value of salt has at times rivaled that of precious stones such diamonds.  Early mining was done by hand and extracted salt rock crystals.  The miners had to slide in and climb out.  Those who died in the mine were dried out and mummified by the salt and over time the salt engulfed them as evidenced by the “Salt Mummie.”  To improve efficiency, fresh water was pumped down into a cavern.  After several weeks of absorbing salt from the walls, the water was pumped out to a processing plant in Hallein and recrystallized.  Visitors to the mine don white overalls to protect their clothes while inside the mine, then take an electric train 400 metres into the mountain.  From there you wander through the tunnels and twice you have to take wooden slides, each 42 metres long, down to the lower levels of the mines.  Visitors straddle two wooden rails and slide down.  This was how the miners used to do it, like sliding down the banister.  At one point, the mine actually crosses under the border between Austria & Germany into Bavaria.  You reach the lowest point in the mine 210 metres underground and arrive at a lake of salty brine.  You cross the lake by boat before taking an escalator back up to the train to exit the mine.  Salt was responsible for the immense wealth of the Salzburg Prince Archbishops; those natural salt deposits were very much the treasure chamber of the Salzburg region.  The Prince Archbishops – especially Wolf-Dietrich von Raitenau, (1559 to 1617) – used the massive profits from the salt trade for many different purposes, but especially to create the baroque buildings of the city of Mozart. Great activity, warmly recommended. 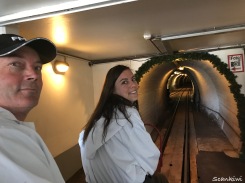 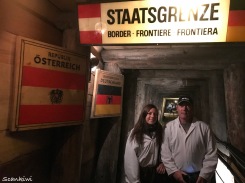 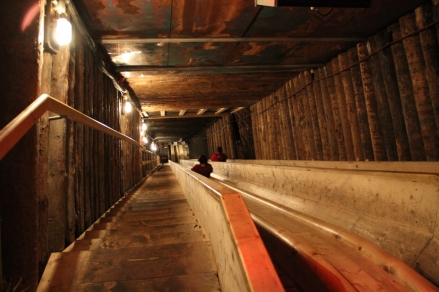 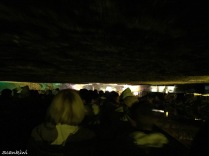 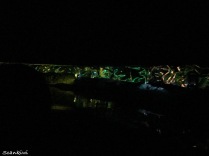 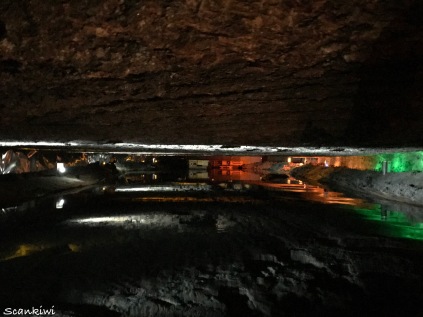 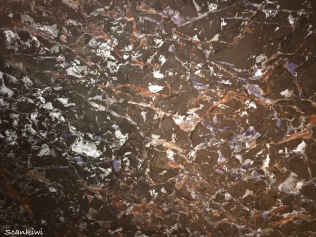 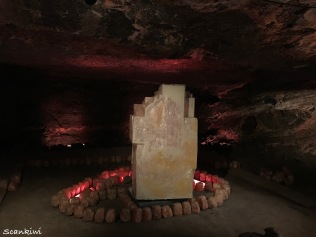 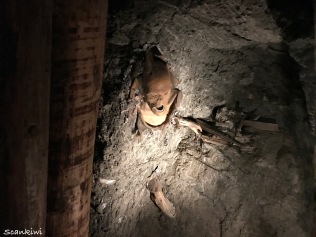 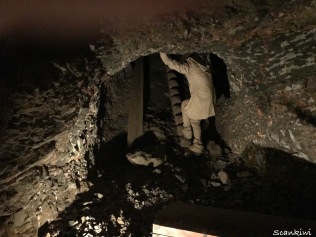 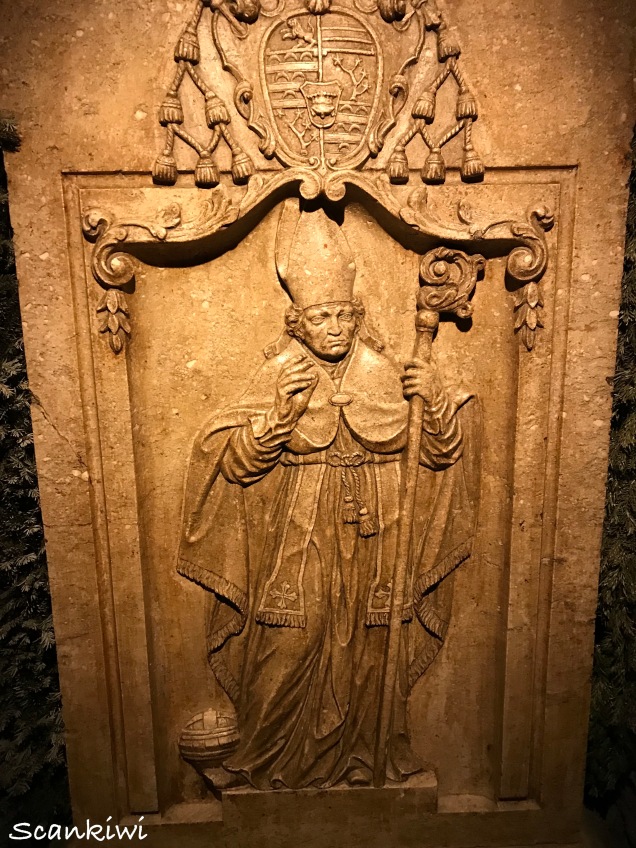 Time to bid Austria farewell for this visit and head towards Munich.  Next stop, lunch on Lake Chiemesee, often called “the Bavarian Sea.”   There are three islands on the lake Herreninsel (the largest “gentlemen’s island”), Fraueninsel (“ladies’ island”) and Krautinsel (“Cabbage Island”; as in Sauerkraut).  On Herreninsel is a palace built by King Ludwig II of Bavaria in 1878 called Herrenchiemsee.  It was never completed because the King died but it was meant to be a replica of the Palace of Versailles.  King Ludwig II is sometimes called the Swan King or the Fairy Tale King.  He succeeded to the throne aged 18 and is often said to be the mad King.  Ludwig II increasingly withdrew from day-to-day affairs of state in favour of extravagant artistic and architectural projects.  He commissioned the construction of two lavish palaces; Linderhof Palace and Neuschwanstein Castle (will tell you more of that in a future post) and he was a devoted patron of the composer Richard Wagner.  Ludwig II spent all his royal revenues on these projects, borrowed extensively, and defied all attempts by his ministers to restrain him.  This extravagance was used against him to declare him insane.  It lead to angry ministers & doctors managing to section and detain him.  He came to an abrupt end at the age of 40 while on a evening stroll with his doctor by the lake in the grounds of one of his palaces.  Both he and his doctor were found dead in knee deep water.  Theories have ranged from foiled escape plans, to suicide and murder.  The mystery remains.  Today, his architectural and artistic legacy are some of Bavaria’s most important tourist attractions; the Herrenchiemsee palace among them.  I would have loved to see it but time was limited and a thunder storm was brewing on the horizon.  We found a lovely place on the shore of the lake to have a picnic.  While away at the car I missed all the action.  Apparently, a couple on the picnic blanket beside us got a visit from a snake which sent everyone scrambling.  On returning, I found we had moved a sufficient distance further along the shore.  In order to avoid being struck by lightning or drenched to the skin we decided the car was a safer place and we might as well hit the autobahn to Munich.  Don’t know if that was such a good idea.  We might be dry but it was horrific trying to drive as the volume of rain reduced the visibility to only a few metres.  Thank god we managed to eventually get ahead of it. 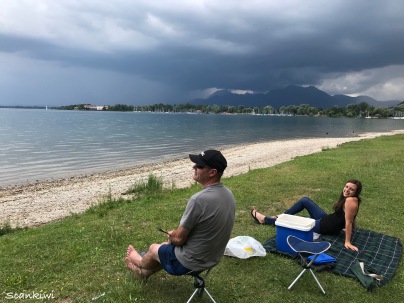 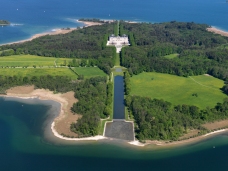 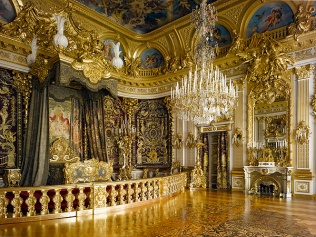 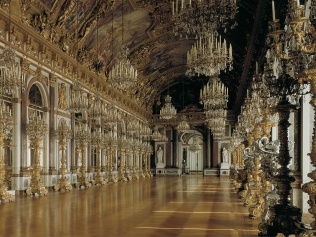 We arrived into Munich (Germany’s 3rd largest city) late in the afternoon.  After having planned to stay in the same hotel (even though we checked thoroughly with one another while booking separately) we found there were actually in 2 different hotels by the same name (Smart Stay Hotel).  I ended up about 2 km from Dave & Steph in a quiet residential area near the Oktoberfest park (Theresienwiese) while they were stuck in the inner city near the train station.  It made for a lot easier parking of the car where I was.  Anyway, after a refreshing beer it was time to take an evening stroll through the old part of the city.

Munich is a large city of 6 million but it is easy to navigate around (even by car).  Munich simply means “by the monks.”  A Benedictine Monastry established here in the 1100s on the salt road from Salzburg lead to the emergence of a settlement here as everyone had to pay the tolls to the monks to cross the river Isar.  Munich was the home of the Bavarian Kings until they were disposed following World War I.  The Communists took power and formed the Soviet Republic of Bavaria but that only lasted a couple of years.  Lenin had lived in the city while in exile before returning to Russia hence the Soviet connection.  The Wiemar republican government drove the German Soviets out, however Munich became a hotbed of extremist politics, and among which Adolf Hitler and the Nazis would soon rise to prominence.  The first attempt of the Nazi movement to take over the German government was in 1923 with the Beer Hall Putsch was stopped by the Bavarian police.  The revolt failed, resulting in Hitler’s arrest and the temporary crippling of the Nazi Party.  The city again became important to the Nazis when they took power in Germany in 1933 and Munich was declared their “Capital of the Movement.”  The party created its first concentration camp here on the outskirts of the city at Dachau.  The city is also known as the site for the culmination of the policy of appeasement by Britain and France leading up to World War II.  It was in Munich that British Prime Minister Neville Chamberlain assented to the annexation of Czechoslovakia’s Sudetenland into Greater Germany in the hopes of sating the desires of Hitler’s Third Reich.

Munich was also the site of the 1972 Summer Olympics, during which Israeli athletes were assassinated by gunmen from the Palestinian “Black September” group who took hostage members of the Israeli Olympic team.  The 1980s brought strong economic growth, high-tech industries and scientific institutions.  Munich is also a major European cultural centre and has played host to many prominent composers including Mozart, Wagner, Mahler, Strauss, and Carl Orff.  Some of classical music’s best-known pieces have been created in and around Munich by composers born in the area, for example Richard Strauss’s Also sprach Zarathustra or Carl Orff’s Carmina Burana which I sang recently.  I learnt just a week ago my baritone friend Martin Snell will be taking up residence at the Bavarian State opera in Munich.

Munich is probably best know for Oktoberfest which actually occurs in September and finishes on the first Sunday in October.  Around 6 million visit the fest over the 2 weeks with some 7.7 million litres of beer being drunk.  It is held in Theresa’s meadows (Theresienwiese).  The name of the site is derived from the name of Princess Therese of Saxe-Hildburghausen, the wife of Crown Prince Ludwig I.  Their wedding took place on the Theresienwiese in 1810 and since then, the Oktoberfest is celebrated every year to commemorate this event.  I preferred the quiet open space when I visited it.

We took a wandered along the Kaufingerstrasse walking street (part of the old salt road from Salzburg) into the Alstadt (Old City), passing the Michaelskirche (St. Michael’s Church; b. 1590s) a large renaissance church and burial site of Bavarian Dukes & Kings.  On past the Frauenkirche (Cathedral of Our Lady; b. 12th century) Munich’s best known building with a capacity to house 20,000 people standing, and finally arriving at the Marienplatz (St. Mary’s Square) in the centre of the city.  The square has been the here since 1158 and gained its name after the column to St. Mary erected in 1638 to celebrate the end of Swedish occupation by Gustav II Adolph (the Swedes got around 400 years ago).  The square is dominated by the New Town Hall (Neues Rathaus; b. 1870s) with its glockenspiel in the tower and the Old Town Hall (Altes Rathaus b. 1300s). 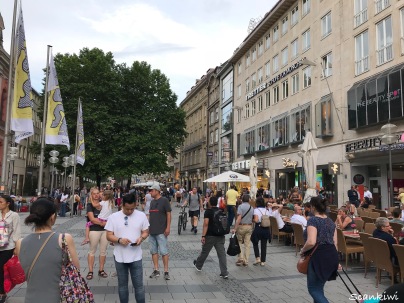 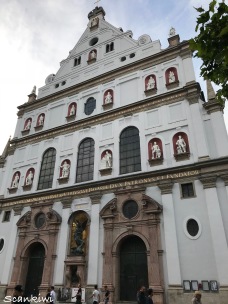 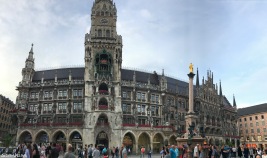 It was a warm summer Friday night so what better place to end the day and the week with a visit to a Beer Hall just like all other hard working Germans.  When in Germany, do as the Germans do!  And where is the best place to go?  Of course the Hofbräuhaus am Platzl (b. 1589) arguably the most famous beer hall in the world.  All of the rooms except the historic beer hall were destroyed in the World War II however it reopened after being restored in 1958.  Mozart is claimed to have written the opera Idomeneo after several visits to the Hofbräuhaus fortified him for the task.  With it cavernous vaulted halls, seating for 1300, baroque frescos all over the ceilings, muscle bound waitresses in traditional dress bearing 6, 7, 8 one litre steins and waiters serving traditional fare of pretzels, cheese dip, bratwurst & Haxe’n; we were in for a good night.  This was my bucket list appointment with a stein and Schweinshaxe with knödel (pork shank & potatoe dumpling) in Munich!  Of course the atmosphere would not be complete without an “ompa pumpa” orchestra (click) belting out beer hall favourites and people singing along.  A large number of people came dressed in traditional lederhosen (men) & dimdl (woman).  I was surprised how many wore the traditional dress as everyday clothing.  The large amount of steins that passed around the hall during the evening lead me to ponder on the equation of “beer in, beer out” while visiting the gents.  The diameter of the drains must be enormous. 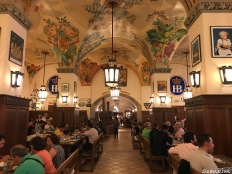 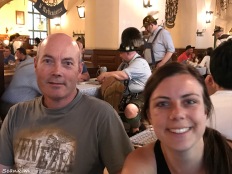 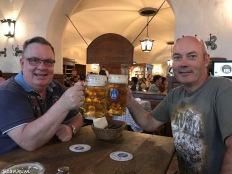 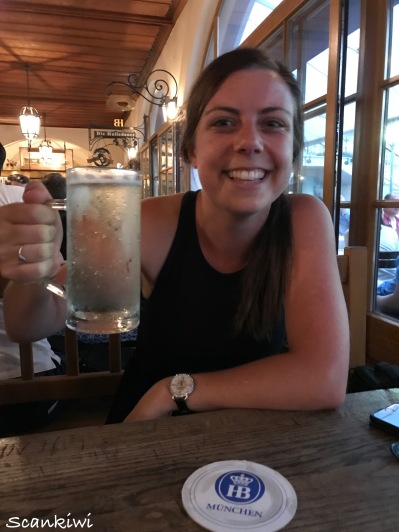 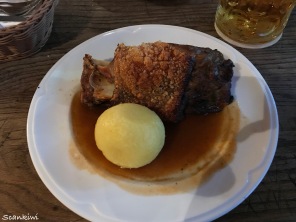 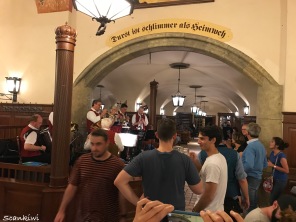 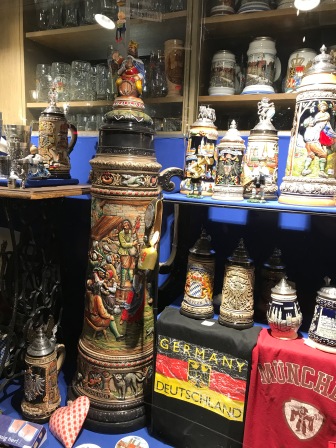 With a great evening being had by one and all, it was time to wander back to the hotel and prepare for tomorrow’s more sobering activities.  Good night.