The past 4 years the world has been commemorating the events of World War I (WWI) and New Zealand has been no exception. The kiwi commemorations began on the 25th of April 2014 at dawn on the beaches of ANZAC cove in Gallipoli, Turkey marking our entrance into world affairs on the global stage as part of the landing force invading the Dardanelles in WWI.  The commemorations have continued since then marking all the major events in which New Zealand has taken part.  I had put my name forward for the lottery for tickets to the ANZAC event in Gallipoli in 2014 but was not lucky enough to get one.  I never gave the commemorations another thought until an invitation arrived from the New Zealand Embassy in Belgium offering the chance to participate in the centennial commemorations of the Battle of Passenchendaele on October 12th 2017.

For those of you who do not know or may be asking the question why is this important: The Battle of Passchendaele is particularly poignant for New Zealand and its history.  It is often said to be our defining moment when we become a country instead of a colony of the British Empire.

The 12th of October is remembered as the darkest hour in our short military history. The day the greatest number of New Zealand soldiers were killed and wounded in a single day.  The failed attack on Bellevue Spur left 843 kiwi soldiers dead and some 2 735 wounded in 12 hours.

Almost 60% of the 100,000 New Zealanders who went to war became casualties. More than 18,000 died of wounds or disease — 12,483 of them in France and Belgium. From a population of little more than a million people in 1914, this meant that about one in four New Zealand men between the ages of 20 and 45 was either killed or wounded.

Horrific figures for a little nation at the uttermost ends of the earth.

Within 3 months our government had passed an act of parliament stating that NZ would only go to war under our own commanders and never under the command of another nation as had happened here. During WWI we were under the command of the British Generals as they considered us not qualified enough to command in battle.  The current criteria to command in Britain at the time was that you were a member of the upper class and Kiwis did not fulfill that criteria hence they were not allowed to command.  Interestingly, some of the greatest successes in WWI were down to Kiwi ingenuity and courage and not their commanders.

With all this history both as a kiwi and on a personal level, I decided I would take the opportunity to attend.

As a side bar; I was visiting NZ in June 2017 and happened to mention I would be attending the commemorations while at the Gore Returned Serviceman’s Association (RSA) and they asked if I would be so kind as to place poppies on the graves or memorials of soldiers from their Roll of Honour that I happened to cross while visiting.

So it was decided I would drive the 1 100 km to Ypres (Ieper) instead of flying as it would be easier to have the car down there to get around. It would be a 2 day trip day down and 2 days back so I decided to see a little of the Westphalian part of Germany on the way. I elected for Bremen on the way down and Münster on the way back. 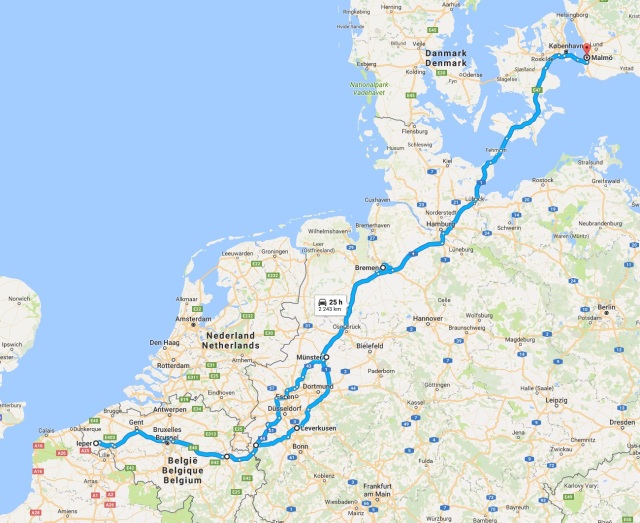